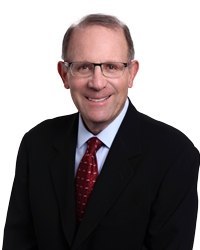 William Garmisa is a seasoned general business counsel to individual entrepreneurs, closely held corporations and mid-sized companies. He has a wealth of experience in the formation of business enterprises, including corporations, partnerships and limited liability companies; mergers and acquisitions; and succession planning.

Billy was born in Chicago in 1943. Upon graduation from the University of Michigan Law School, he participated in the first VISTA (Volunteers in Service to America) lawyer program sponsored by the federal government.

He joined Aronberg Goldgehn Davis & Garmisa in 1970, became a partner in 1976 and served as the Managing Member from 1993 through 2008. He holds the AV® Peer Review Rating from Martindale-Hubbell, its highest rating for ethics and legal ability.

What is your favorite thing about working at Aronberg Goldgehn? The high professional standards and collegial culture.
What is one item on your bucket list? A trip to New Zealand.