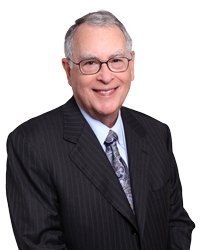 Bernard Schlifke focuses his legal practice on banking, corporate transactional and real estate matters. In addition, he acts as outside general counsel to many businesses that are not of sufficient size to warrant in-house counsel, providing a wide range of advice and counsel to these entities.

In his banking practice, he primarily represents lenders in commercial/business lending and real estate-related lending loans. He also has extensive experience in bank regulatory matters.

Bernie's corporate work includes the structuring and implementation of both the acquisition and sale of businesses, and the representation of privately owned businesses.

In real estate matters, Bernie represents buyers and sellers of properties of all types.

Over the past 40-plus years, Bernie has handled more than 50 mergers and acquisition transactions in a wide variety of industries, including banking, insurance, distribution, metal fabrication and fast food, including:

Bernie joined Aronberg Goldgehn in September 2005. He holds the AV® Peer Review Rating from Martindale-Hubbell, its highest rating for ethics and legal ability. In addition, he has been recognized as a Leading Lawyer in Banking & Financial Institutions Law annually since 2004 by Illinois Leading Lawyers. He has also been named a Super Lawyer in Business/Corporate and Real Estate Law by Illinois Super Lawyers.

Bernie has served as a board member of various entities in a wide range of industries, including banking, real estate, service, manufacturing and insurance. Currently, he is a member of the Advisory Board (and is a past President) of Family Service: Prevention, Education & Counseling NFP, an 80-plus year old not-for-profit corporation serving communities in Lake and Cook Counties in Illinois.

What would you be doing if you weren’t a lawyer? Playing golf
What is your favorite restaurant?
Coco Pazzo