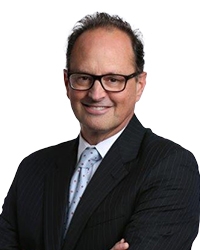 Tom Hanekamp is Co-Chair of the Insurance Coverage Group at Aronberg Goldgehn. He is an accomplished litigator and trial lawyer who focuses his practice on major commercial litigation on a nationwide basis on behalf of insurers in coverage matters involving general liability, management liability and professional liability.

Tom joined Aronberg Goldgehn as a member in August 2016. Previously he was a partner at Tressler LLP, where he had practiced since 1987.

He holds an AV® Preeminent rating from Martindale-Hubbell, which is a testament to the fact that a lawyer’s peers rank him at the highest level of professional excellence for his legal knowledge, communication skills and ethical standards. Tom was included in the 2022 edition of The Best Lawyers in America, a peer-review based publication in which attorneys complete detailed evaluations of fellow lawyers. Since 1983, Best Lawyers has annually chosen the top six percent of attorneys within the United States to be recognized with this title.

In 2020, Tom was elected a Fellow in the prestigious American College of Coverage Counsel, which is composed of preeminent coverage and extracontractual counsel in the United States and Canada.

Tom is a frequent author and speaker on a variety of topics, such as failed bank litigation, the subprime mortgage crisis, the proper use of experts in litigation, presenting the corporate witness for deposition and electronic discovery. Additionally, he is a long-time author and editor of a monthly e-newsletter and subsequent blog providing insight into recent case law in the specialty lines arena and their potential impact on insurers’ coverage determinations and claims handling.

He is an editor of and a contributor to Aronberg Goldgehn’s Insurance Coverage Update, including:

He has also published:

A sampling of his presentations includes:

Tom serves as a Director of Deliverance Manor Housing Corporation, subsidized apartments for the elderly on Chicago’s South Side; volunteers at Breakthrough, a women’s shelter in Chicago’s East Garfield Park neighborhood; participates in the Lawyers in the Classroom program at Chicago Public Schools; served on his local school board for three years; volunteered at Hesed House, a homeless shelter in Aurora, Illinois; and is a member of the Grant Park Advisory Council in Chicago.

Tom and his wife, Nada, live in Chicago, and they have two adult children – a daughter living in New York City and a son attending graduate school in Munich, Germany.