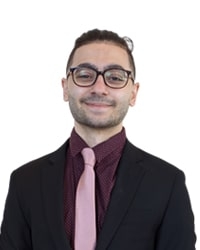 Mishael is a rising second-year law student at Northwestern Pritzker School of Law where he will serve as Co-President of the Diversity Coalition for the upcoming academic year. He is also active in the International Law Society and Student Bar Association Honor Board.

Prior to matriculating, Mishael worked for a cryptocurrency firm in Northern California, where he utilized his B.A. in Communication to develop growth strategies and social media campaigns for his clients.

Mishael earned his bachelor’s degree in December 2018 from University of California, Davis, where he co-authored an academic paper on leadership and virtual communication.

In the community, Mishael worked for the Young Scientist Program, a non-profit that seeks to address the inequalities in STEM demographics by encouraging under-represented minority students to engage with STEM extra-curricular activities, and partners middle-school students with high school mentors.

Mishael is fluent in Arabic and has conversational language skills in French and Mandarin.

Mishael is not admitted to the practice of law in any jurisdiction.

In his spare time, Michael loves playing and watching basketball, and enjoys weightlifting, music, and modern art. He also loves to cook and is always on the hunt for new recipes or restaurants across all cuisines.

What is one item on your bucket list? I would love to visit the Bahamas and Bali, and learn how to surf!

What would you be doing if you weren’t becoming a lawyer? I would be most likely be working in cryptocurrency in Northern California.

What is your favorite place in Chicago? My favorite place (so far) is probably the Lakefront Trail, or the iconic Riverwalk. They’re both incredibly serene atmospheres, and no matter when you visit them there’s always a story to see unfold.

What is your favorite restaurant? It always changes! Recently I found an amazing minority-owned restaurant in the heart of Streeterville called the Silver Spoon. It’s some of the best Thai food I’ve had in a tiny spot unsullied by the nearby towering skyscrapers.

What is something most people don’t know about you? I greet every dog I pass by on the street!