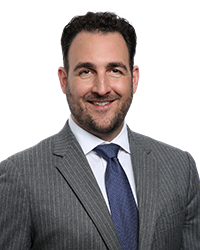 Christopher W. Niro focuses his practice on intellectual property litigation, prosecution and other business affairs, including brand management and portfolio development. He represents individuals and entrepreneurs, as well as mid-size companies and multinational organizations.

Christopher advises his clients with regards to patents, trademarks, copyrights and trade secrets. In addition, he has extensive experience with all aspects of intellectual property litigation in both state and federal trial and appellate courts.

Christopher joined Aronberg Goldgehn as a member in April 2019. Prior to joining the firm, he was most recently Of Counsel at Johnson & Bell and a Founding Partner of Niro Law Group, LLC, an intellectual property and business litigation boutique firm.

Christopher has also worked as a policy analyst in the Illinois Office of the Comptroller, Daniel W. Hynes, and has experience in statewide and national political campaigns.

During law school, he served as a judicial extern to Hon. William J. Bauer of the U.S. Court of Appeals for the Seventh Circuit. Also in law school, he earned the CALI Excellence for the Future Award in Trial Advocacy.

Since February 2010, Christopher has volunteered his services as part of the Settlement Assistance Program for pro se plaintiffs of the U.S. District Court for the Northern District of Illinois in partnership with the Chicago Lawyers Committee for Civil Rights Under Law.

In his free time, along with spending time with his family and young son, Christopher enjoys participating in physical activities, including Olympic distance triathlons, snow skiing and playing ice hockey. His continuous training allows him to partake in his other passion, cooking and entertaining.

What is your favorite thing about working at Aronberg Goldgehn? I love how welcomed I was when joining the firm; it truly feels like a large family.
What is one item on your bucket list? Skiing in Europe and Japan.
What would you be doing if you weren’t a lawyer? I would be working with innovative companies bringing products to market…which probably pays better than traveling the world.
What is the best vacation you’ve ever been on? I travel regularly for work and pleasure and my most recent favorite was in Sitges, Spain, with my wife and then 2-year-old son.
What is your favorite restaurant? Too many to name one favorite: The Purple Pig, Vivere, Acadia, The Aviary, Lou Malnati’s, Lena Brava, etc.